That's the title TOH gave our submission for the bathroom "Reader Remodel" contest category. Now that description is certainly accurate but I would have added "Spectacular", "Stunning" and maybe "Winner" behind the title. Whatever comes of the winners remodeled spaces, you can bet we are thrilled to enjoy ours, cash prize or not. 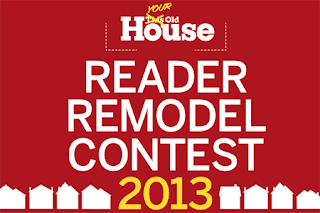 Cleaning up the "character"


Ok, so it's cold outside right now but it is oh so warm inside and not because there is a warm, toasty fire going on in the wood-burning stove. What I am referring to is another piece to the puzzle that helped complete our bathroom--the cast iron bath tub.

Now I'm not exactly one for keeping all the "character" of an old house because the word character to me now just means more work and more problems than generally something that is new.

But this fixture is one of those things that though it possesses character, it also holds a lot of function and beauty in addition to a lot of water. But in the beginning it was not so. And thanks to my then-fiancé, it became my  project in-between times when he would work on tasks that I could not assist with.

Now, once removed from the bathroom, a nice little custom dolly was built in order for it to be easily wheeled around the house as we moved from room to room in the demo and renovating process. And roam it did. The tub, along with our eager toilet kit purchase, rolled around and around to keep it from totally being in the way.

The first step in the refinishing process was to remove as much of what was on the surface of the inside of the tub to reveal a smoother surface for more prep-work that included sanding and filling in dimples and imperfections. Though at first glance it appeared in fairly good condition, one pass along the surface with your hand revealed a combination of pits, rust and waviness.

So I got to work on the inside with a small electric palm sander, hand sanding blocks and just simple squares of sandpaper. In addition to the tub, there was an old cast iron wash sink that was in the basement that we thought--why not finish that, too?

So as time and other house projects dictated, I would assume the responsibility to labor on the two fixtures. This process as my husband can surely tell you was not my favorite thing to work on, if I even could identify a favorite! It was certainly the worst of all the evils in my mind at the time but in working on them, I guess I figured it was something I could do on my own and it seemed so often that was reason enough.

In this rare instance, these projects became a team effort outside of our house and ourselves. Once the inside and outside of the tub was finished to the best of my ability and with our tools, my parents graciously transported the tub to their farm where they sandblasted the outside to remove the remaining paint and continue the prep process before the final refinishing began.

Once this process was completed, the next step was to turn it over to a professional tub re-finisher  Though we had considered trying our hand at this process (as we did with every project we came across) our final decision was to leave this to an expert and finally wash (no pun intended) ourselves of the responsibility.

So it was this past month that we completed final installation and years of having that empty space in our bathroom were no more.

What happened to the sink? Well, needless to say, that work so far has been in vain as I have tried not to bring up the subject too often for old wounds recalling hours of toil come to mind. We decided (after I had completed much of the prep-work process) that it was too large for our bathroom and the sink was not the best use of space. Our plans have not further entertained the idea of using it in our anticipated bathroom in the basement so for awhile longer, it will stay in my parents shed until a suitable plan can be determined.

Such is the fate of some of our ideas and time spent working on our house but I guess there was something to be learned from this whole process...just buy it new!